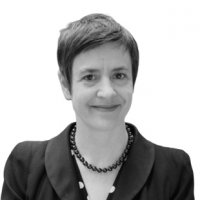 Amelia Fletcher is a Professor of Competition Policy at the ESRC Centre for Competition Policy at the University of East Anglia. She is also a Non-Executive Director at the Competition and Markets Authority and a member of the Enforcement Decision Panel at Ofgem. Until 2020, she was a Non-Executive Director at the Financial Conduct Authority and Payment Systems Regulator and also DGComp’s Economic Advisory Group on Competition Policy. She was a member of the Digital Competition Expert Panel, commissioned by the UK Treasury and led by Jason Furman, which reported in March 2019. She was previously Chief Economist at the Office of Fair Trading (2001-2013), where she also spent time leading the OFT’s Mergers and Competition Policy teams. Before joining the OFT, she was an economic consultant at Frontier Economics (1999-2001) and London Economics (1993-1999). She has written and presented widely on competition and consumer policy. In her ongoing research, Amelia has a particular interest in the implications for competition and consumer policy of behavioural economics and online markets. Amelia has a DPhil and MPhil in economics from Nuffield College, Oxford.