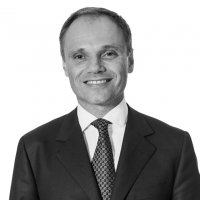 Robbert Snelders is a partner based in the Brussels office. Mr. Snelders’s practice focuses on EU competition law. He has extensive experience in EU and worldwide merger control proceedings, EU and international cartel and abuse of dominance investigations, litigation before national courts and the European Courts in Luxembourg, and arbitration proceedings. Mr. Snelders has been involved in many leading merger and alliance cases, including Exxon/Mobil, Exxon/XTO, GM/Fiat, Alitalia/Air France, Phillip Morris/Nabisco, IBM/PriceWaterhouse Coopers, IBM/Informix, IBM/Rational, IBM/Telelogic, IBM/Cognos, Sony/BMG, Mittal/Arcelor, Gazprom/Wingas, and Suntory/Beam. He has represented clients in numerous cartel investigations, including in the lysine, nucleotide, faucets, bitumen, wax, DRAM, optical disk drive, automotive components, and gasoline sectors. He recently represented Citigroup in connection with the investigations of various financial benchmarks and CDS data licensing. Mr. Snelders also regularly represents companies in abuse of dominance investigations, including Google in an EU investigation of several complaints involving Google’s search service, IBM in EU investigations of its mainframe server business, and Dassault Systèmes in an EU investigation of the CAD-CAM industry. Mr. Snelders has been involved in a number of proceedings before arbitral tribunals, national courts, and before the European Courts, including for General Motors in its successful appeal to the European Court of First Instance to reduce a €43 million fine for alleged export restrictions, for Sony and SONY BMG in their successful appeal to the European Court of Justice of the Court of First Instance’s judgment annulling the Commission’s decision approving the formation of SONY BMG, and for ExxonMobil in a pending appeal before the Court of First Instance against an €83 million cartel fine. Mr. Snelders is co-editor and co-author of the "Abuse of Dominance Under Article 102 TFEU," a book published by Claeys and Casteels, and is co-author of the annual “Antitrust Developments in Europe,” a book published by LexisNexis. Mr. Snelders is also a member of the Scientific Council of the College of Europe’s Global Competition Law Centre. He is distinguished as a leading Competition/Antitrust lawyer by Chambers Global and was included in Global Competition Review’s “40 Under 40” survey of the world’s brightest young antitrust lawyers, Euromoney’s Guide to the World’s Leading Competition and Antitrust Lawyers, and Legal Business Research’s International Who’s Who of Competition Lawyers. Mr. Snelders joined the Firm in New York in 1992 and became a partner in 2001. During 1996 and 1997, he clerked for Justice Kapteyn at the European Court of Justice. He is a graduate from Harvard Law School, the College of Europe, and Leiden University (highest honors; Legatum Bockelmannianum, prize for highest grade point average in first year). Mr. Snelders also attended a special program for foreigners at the Institut d’Etudes Politiques de Paris. Mr. Snelders is Dutch and is a member of the New York Bar and the Brussels Bar. His native language is Dutch and he is fluent in English and French and proficient in German.