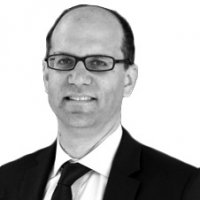 Ben Gris is a partner in the Antitrust practice. Ben specializes in antitrust investigations and litigations with a focus on mergers and acquisitions. Ben joined the firm in 2018 after serving for nearly 12 years at the Federal Trade Commission, most recently spending three years as Assistant Director of the FTC’s Bureau of Competition. During his time at the FTC, Ben served as lead investigator, manager, and/or litigator on hundreds of matters, including frequent collaboration with foreign antitrust agencies on cross-border transactions. Ben was also involved in the development of best practices for cross-border merger review and interagency cooperation. As Assistant Director, Ben was the head of the FTC’s Mergers II Division, which oversees investigation and litigation in a wide range of industries, including chemicals, automotive, semiconductors, computer hardware and software, recorded music, tobacco, fertilizers, and a variety of intermediate products. Prior to becoming Assistant Director, Ben served as a Deputy Assistant Director of the Mergers II Division from 2011-2015. Ben is also a frequent speaker at ABA, International Competition Network, and other organizational events.