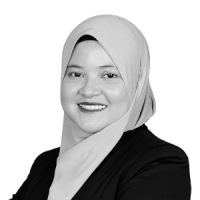 Hanizah is a senior associate in the Mergers, Acquisitions and Corporate Practice Group of Azmi & Associates. She has been working with domestic and foreign private and listed companies on a wide range of mergers and acquisitions, corporate and compliance matters. She has been involved in various aspects of structuring, documentation and negotiation and has assisted in notable transactions across a number of industries. She has also advised clients on competition law matters. She graduated from the University of Malaya with a Bachelor of Laws (LL.B) (Hons.) in October 2014 and was then awarded with a Degree of Master of Laws (LL.M) with distinction from the same university in 2017. She joined Azmi & Associates as a pupil in October 2014 and was called to the Malaysian Bar and admitted to the roll of advocate and solicitor of the High Court of Malaya in September 2015.