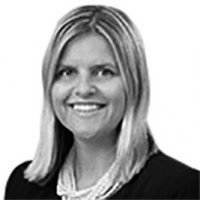 Recently named a "Winning Litigator" for 2018 by The National Law Journal, Kate Wallace is a first-chair litigator with experience in a broad range of complex commercial matters, with an emphasis on antitrust and unfair competition litigation. She represents companies in class actions and in complex civil litigation through trial, in both state and federal courts.Kate represents clients in a variety of industries, including health care, technology, retail, sports, grocery stores, and car rental. In June 2018, Kate successfully represented the Boston Red Sox in a two-week jury trial in the first-ever "foul ball" trial in Massachusetts. In 2016, Kate was named a "competition rising star" by Law360, one of only seven antitrust lawyers named in the U.S. In 2012, she was part of the trial team that obtained a defense jury verdict on an antitrust claim filed against Santa Barbara Cottage Hospital. She also helped obtain a defense jury verdict on class action antitrust claims filed against Macy’s, a verdict which was ranked as one of the "Top Ten Defense Verdicts" of 2007 by the Daily Journal.Kate maintains an active pro bono practice and also serves on the board of Prosperity Catalyst, an organization that launches and incubates women-led businesses in distressed regions.Kate currently is the co-chair of the ABA Antitrust Section’s Civil Practice and Procedure Committee. She also has co-chaired the Antitrust Law Committee for the ABA’s Young Lawyers Division and served as the Young Lawyer Representative for the Antitrust Section’s Unilateral Conduct Committee. Kate has published numerous articles on emerging antitrust issues.