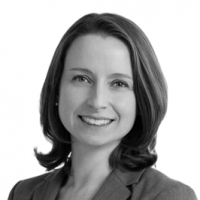 Lori Taubman is an associate at Covington & Burling. Prior to becoming an attorney, she worked as a federal government economist for nearly a decade. After completing her Ph.D. in Economics at Stanford University, she worked at the Antitrust Division of the Department of Justice where she partnered with attorneys on merger reviews and other investigations of potentially anticompetitive conduct. She later joined the Consumer Financial Protection Bureau in its first year of operation where she performed regulatory impact analyses for rulemakings, provided statistical analysis for fair lending reviews, contributed to retrospective assessments, and furnished economic analysis in support of a variety of policy initiatives. She also attended The George Washington University Law School part-time as a Presidential Merit Scholar. While in law school, Ms. Taubman was a Legal Intern for FTC Commissioner Terrell McSweeny and a Judicial Intern in the Chambers of the Honorable Beryl A. Howell, Chief Judge of the US District Court for the District of Columbia.