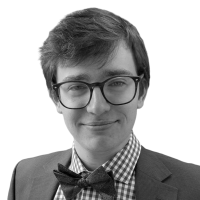 Stephen Stasko is a third year law student at the George Washington University Law School in Washington DC, where he is the Senior Managing Editor of the International Law in Domestic Courts Journal. Originally from Pittsburgh, Pennsylvania, he graduated magna cum laude from Wake Forest University with a Bachelor of Arts in English and History. Stephen works for the United States Senate Permanent Subcommittee on Investigations after working previously for the United States Senate Committee on the Judiciary. He is also research assistant for Professor and former Chairman of the Federal Trade Commission William Kovacic, and covers the Supreme Court for Congressional Quarterly. Professor Kovacic and Stephen are currently writing a paper about how to evaluate the activities of competition agencies properly with a focus on responsiveness to Congress, success in litigation, and agency reputation. Upon graduation, Stephen will clerk for the Honorable Zachary Somers on the United States Court of Federal Claims and the Honorable Joel M. Carson III on the United States Court of Appeals for the Tenth Circuit. His specialties are antitrust, takings, labor, employment, and international law.