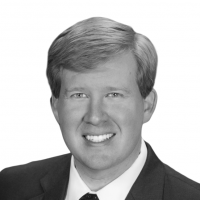 Michael Murray is Partner at Paul Hastings since 2021. He also served as the Principal Deputy Assistant Attorney General. In that position, he oversaw the work of 350 attorneys and 50 economists and supervised all merger, cartel, and civil conduct matters from investigation through appeal. Michael joined the Antitrust Division from the Office of the Deputy Attorney General, where he served as Associate Deputy Attorney General. In that office, Michael had oversight responsibility for the Civil Division, the Antitrust Division, and criminal law policy initiatives. Before joining the Department of Justice in early 2017, Michael was in private practice, where he was an appellate and trial-court litigator in a variety of commercial litigation and antitrust disputes. Michael clerked on the U.S. Court of Appeals for the Ninth Circuit for Judge Diarmuid F. O’Scannlain and on the U.S. Supreme Court for Justice Anthony M. Kennedy. He graduated from Yale Law School and Princeton University, summa cum laude.