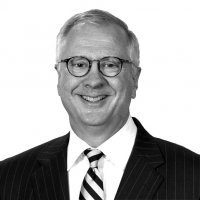 Walter Kelley is a Partner in Hausfeld’s Washington D.C. office, which he joined in 2014. As a former United States District Judge for the Eastern District of Virginia and a recent partner in one of the largest law firms in the world, Walter Kelley brings unique insight to high stakes litigation. He has extensive experience representing both plaintiffs and defendants in disputes between businesses, particularly in the areas of antitrust, intellectual property and securities. As a lawyer, Walt has tried more than 25 jury cases, obtaining verdicts for his clients in cases ranging from monopolization and resale price fixing, to the Robinson-Patman Act, to patent infringement. He has negotiated settlements for companies that were targeted by international cartels, and has served as counsel in numerous shareholder and partnership disputes. He has argued appeals in the Third, Fourth, and Ninth Circuits, as well as state appellate courts. As a judge, he presided over thousands of cases encompassing all areas of the law and authored 50 published opinions. He also sat by designation on the United States Court of Appeals for the Fourth Circuit and authored six appellate opinions. In addition to maintaining an active trial docket, Walt serves as a mediator and arbitrator for business related disputes. He has mediated cases involving patent infringement, defective tax shelters, mergers and acquisitions, minority shareholder oppression and international distribution contracts. He has served as an arbitrator for cases involving copyright infringement, trademark infringement, insurance coverage, breach of M&A post-closing covenants, and dissolution of closely held corporations. Among other organizations, Walt also serves on the International Trade Commission’s panel of mediators for Section 337 (patent infringement) cases.